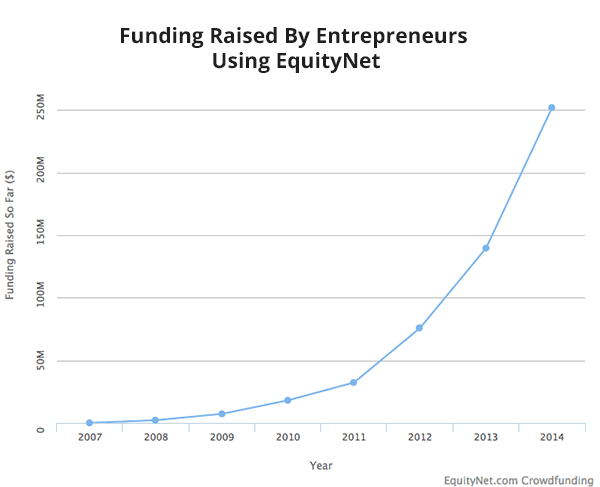 EquityNet is announcing today that its membership base of entrepreneurs, investors, and institutions has surpassed 50,000 individuals. As a result, over 400 companies have raised more than $250 million in business funding, making EquityNet one of the leading business crowdfunding platforms.

Judd Hollas, founder and CEO of EquityNet, stated, “EquityNet is more than just a large number of entrepreneurs and investors communicating online. Our crowdfunding platform streamlines the funding process for entrepreneurs and the due diligence process for investors. We combine a variety of patented technologies including financial analytics, business benchmarking tools, and peer-based scoring metrics to achieve a superior experience for investors and a higher funding success rate for entrepreneurs. We are proud that we have achieved these numbers, and we look forward to the further expansion that will occur as the crowdfunding industry continues to grow.”

EquityNet was founded in 2005 and was one of the first operating crowdfunding platforms in the world. Since its inception, it has allowed entrepreneurs from all industry sectors to connect with accredited investors to raise capital for their startups and small businesses. Using EquityNet, these entrepreneurs have raised one of the largest amounts of equity, debt, and royalty-based business capital in the industry. Companies like Ascenergy, based in Newport Beach, California, have taken full advantage of the capabilities that EquityNet has to offer.

“In a matter of only a few months, the EquityNet team provided us with powerful tools, connections and support that aided us in successfully raising over $2.5 million in the first few months of our crowdfunding campaign,” said Wally King, Director of Sales and Marketing of Ascenergy, LLC.

Crowdfunding has already shown to improve the capitalization of young businesses, often considered to be the most limiting factor in modern capitalism. The US JOBS Act, signed into law by President Obama in 2012, focuses on the growth of private companies in the United States. In September 2013, EquityNet was the first crowdfunding platform to enable Title II of the US JOBS Act, which allows businesses to publicly advertise their need for equity funding online and take advantage of the lifting of the eighty year-old ban on general solicitation in the United States.

In addition to the ability for entrepreneurs to publicly advertise their need for funding, EquityNet provides entrepreneurs and investors the most advanced crowdfunding technologies in the global industry. EquityNet currently holds five granted crowdfunding patents and additional pending patents in the United States, covering multiple distinct inventions. This leading technology provides innovative campaign creation and distribution abilities for entrepreneurs and is combined with the industry’s most advanced screening and due diligence technology for investors.

Randy Whitehead of Infrastructure Realty Trust stated, “In our earlier oil and gas venture days we had to spend many hours in physical “data rooms” digging through paper records and reports, and also spent many days traveling to those facilities across the country. Now, however, sites like EquityNet have exponentially increased productivity, not only for due diligence but also with the other integrated value added services, they serve not only the data room function, but help to increase the velocity of information and communications, negotiations and funding amongst entrepreneurs and VCs. The difference between the old paper days and crowdfunding is similar to the difference between the horse and saddle and a Gulfstream G650ER, and as entrepreneurs and VCs know all too well, time is money.”

This press release was originally published in Globe Newswire.